This week at RLC we had six teams go head to head in a school hockey tournament. Our teams consisted of Will and the Others, The Dream Team, Rainbow Unicorns, Muskokan Moose’s, SSSHC and JJ What the Snache.

Each day, four teams played ten minute games to determine who would play in the finals. All teams played well, with many of the games ending in shootouts.  Congratulations to all teams on your efforts and skills.Teams (1) Will and the Others, and (6) JJ What the Snache did not make it to the semi finals, but battled it out for fifth and sixth place on Wednesday. Team six took the win for a fifth place standing. Semi finals on Thursday had four teams coming head to head to fight for their spot in the finals. The pressure was on and the teams played hard, with teams (2) The Dream Team and (5) SSSHC coming out as the winners.

Friday’s finals proved to be a game not like the rest. The crowd was bigger and excitement was in the air. We stood proud for Oh Canada, and while we played a drone recorded and took pictures. Halfway into the twelve minute game, The Dream Team was winning 2 - 0, but not for long.  SSSHC came back strong and tied up the game, forcing the game into overtime. The teams battled it out for the win until it was decided to wrap the game up with a shoot out.

One goal was made, and then another and another, until we were left with SSSHC in the lead at 5-4. It wasn’t over yet though, it was The Dream Team’s turn to take a shot.  One of the team members got prepared, wind up, psych out and he shoots … saved by the goalie!!!! SSSHC takes the title!  The crowd went wild and SSSHC screamed victoriously. And that, people, is the day that the Village of Rosseau told RLC to keep the volume down. 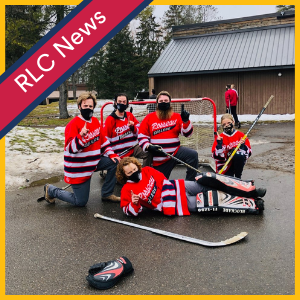